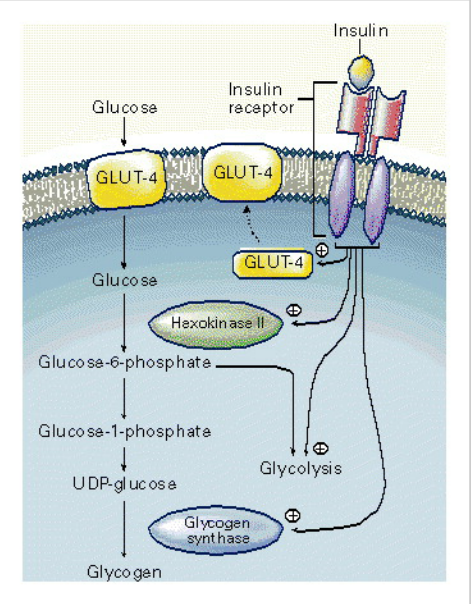 However in insulin resistance, insulin does not bind to the receptors found in the membrane and HSL activity is not suppressed, resulting in an increased hydrolysis of triglycerides, which in turn leads to increased release of glycerol and fatty acids in the blood. In the muscle and adipose tissue, these fatty acids inhibit the insulin-mediated glucose uptake by the muscle and adipose tissue causing high blood sugar and resulting in the pancreas to produce more insulin. Since the insulin is not being utilized because of the FFAs, insulin resistance develops.

After being released into the blood, the high free fatty acids flux to the liver, increasing the production of Triglycerides which are incorporated into VLDL (very low density lipoproteins) which are then secreted into the bloodstream. Once there, the VLDL is broken-down into triglycerides, becoming LDL cholesterol.

Under normal conditions, insulin inhibits the secretion of VLDL into the circulation. During insulin resistance as seen in MetS, the high levels of free fatty acids in the blood cause the liver to increase triglyceride synthesis, resulting in hypertriglyceridemia. If hypertriglyceridemia is present, the lipoprotein core of cholesterol gets replaced with triglycerides causing a reduction in HDL.

Research clearly demonstrates the value of diet and exercise in reducing the risk of metabolic syndrome and the underlying conditions. Combining diet and exercise with the structure of the CHANGE Program is creating impressive results across the country.

Why the Mediterranean diet works

The CHANGE Program has selected the Mediterranean diet as one of the building blocks for a personalized and gradual diet and exercise lifestyle intervention program to combat MetS.

Restricting overall calorie intake can improve MetS by reducing accumulation of adipose tissue and the accompanying insulin resistance. In addition, the substitution of saturated fats with unsaturated fats, i.e. Omega-3 fatty acids, help reduce the risk of heart disease and stroke by lowering LDL cholesterol and triglyceride levels, enhancing the elasticity of blood vessels and preventing the build-up of harmful fat deposits in the arteries.

The Mediterranean diet has shown to be quite effective in the prevention of MetS. It's characterized by consuming foods:

The high content of vegetables, fresh fruits, cereals and olive oil guarantees a high intake of beta-carotene, vitamins C and E, polyphenols and various important minerals that are suggested to have a beneficial effect. Several researchers have associated the Mediterranean diet with improvements in the blood lipid profile (in particular HDL cholesterol and oxidized LDL), decreased risk of thrombosis (i.e., fibrinogen levels), improvements in endothelial function and insulin resistance, reduction in plasma homocysteine concentrations, and a decrease in body fat.

The theoretical mechanism for chronic exercise promoting a reduction in body fat involves increased total daily energy expenditure without a corresponding increase in energy intake. It is generally accepted that long-term physical activity of sufficient intensity, duration and frequency has a favorable effect on weight reduction and body fat distribution. Evidence supports the hypothesis that the effectiveness of exercise to induce weight loss is directly related to the initial degree of obesity and the total amount of energy expenditure. The beneficial effect of physical activity on blood pressure levels has also been shown and it has been accepted that moderate levels of exercise can significantly decrease blood pressure in patients with mild to moderate essential hypertension.